To celebrate the Chinese New Year, here are some group trips to China, plus travel ideas closer to home.

See all the major sights

Wendy Wu Tours offers a number of holidays to China, many of which are suitable for group bookings. A 16-day Wonders of China tour takes in many of China’s most iconic sights and experiences, including Beijing, China’s historical capital; a walk along the Great Wall; the Jade Museum; Xian and the Terracotta Warriors; and a Yangtze River Cruise.

Pictured: The Great Wall of China.

Ramblers Walking Holidays has launched a 15-day Hong Kong and the Islands trip which mixes quiet countryside meanders with buzzing city street walks. Hong Kong is known for its skyscraper rimmed harbour but is surrounded by pockets of hill country and countless islands. The itinerary includes the opportunity to explore the New Territories with a hike along the Maclehose Trail, a ride on the Kowloon-Canton railway to mainland China and free time to sightsee and shop.

Pictured: One of the islands surrounding Hong Kong.

Cruise along the Yangtze

Viking River Cruises has announced its 2019 itineraries, and one – called the Imperial Jewels of China – encompasses walks along the Great Wall of China and through Beijing’s old hutong neighbourhoods. Groups will see the stylised sculpted beasts guarding the Sacred Way of the Ming Tombs, and cruise between the bamboo groves and limestone pinnacles of the Yangtze’s Goddess Stream. The 14-day cruise tour includes 11 guided tours and departs between March and November 2019.

A Silk Road adventure holiday for groups of up to 12 people can be booked with Responsible Travel and involves two weeks exploring China’s far western corner. The itinerary takes in Urumqi, a remote city surrounded by desert in the shadow of the Tian Shan mountain range, and nearby Tian Chi Lake, otherwise known as Heavenly Lake. Other highlights include the ruined city of Jiaohe, Dunhuang and the Mogao Buddhist Caves. 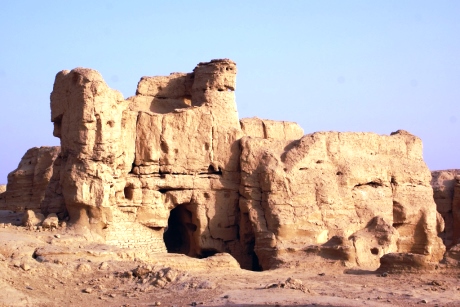 Pictured: Old houses in Jiaohe on the Silk Road.

Can’t make it to China in the near future? Fear not, a very important piece of China is closer than you might think.

As part of its China Dream season this year (that celebrates the relationship between China and the UK), Liverpool has welcomed an exhibition of some of the Terracotta Warriors to the World Museum, where they’ll be on display until 28th October to tell the story of the formative years of the Chinese nation.

GTOs should head to www.liverpoolmuseums.org.uk to fill in the group visit request form for parties of ten or more.

Group Leisure & Travel magazine had a sneak peek of the warriors before they opened to the public; you can read the review here.