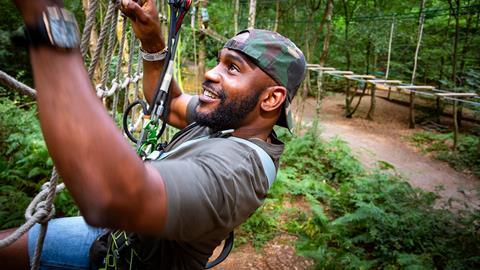 5 thrilling adventures for groups to face their fears

We look at five trips that groups feeling brave should have at the top of their lists.

Ever looked up at the London O2 Arena and thought ‘I want to climb that’? Well now you can with Up at the O2. This 90-minute climb over the iconic domed roof will allow you to see the city from a height and enjoy the views from above. A variety of climbs are available from those during the day to sunset climbs and twilight climbs.

Combined dining packages are available too, so you can look forward to a tasty meal after facing your fears.

You might recognise the red structure of this attraction pointing into the London skyline surrounding the 2012 Olympic Stadium, Queen Elizabeth Olympic Park, but you may not have experienced its exhilarating interior. The attraction within is said to be the world’s longest and tallest tunnel slide offering panoramic vistas - that’s if you’re brave enough to open your eyes.

If you’re looking for adventure, then look no further than Go Ape, which has courses dotted all over the UK, so you’re bound to find one that’s not too far. Combining ropes, zip wires and jumps, this treetop experience invites you to guide yourself through a series of challenges whilst up in the air.

Don’t worry if you’re not brave enough to tackle to difficult activities, because there will be plenty of easier routes too, not to mention there’s a lower course for little ones…or those a bit scared.

Whether it’s Halloween or not, some groups just love a fright. Visit The London Bridge Experience & London Tombs and learn about the gory history of London Bridge, before entering into the tombs.

The tombs involve a maze of dark tunnels featuring different terrifying scenes. And be prepared for monsters to jump out at you, because they will given the chance.

If your group fancies a day out at a theme park, head to Alton Towers and ride the recently opened Wicker Man ride, based on the film. This ride, made of wood, features flickering flames and the sights and smells of a bygone era.

Despite its scary appearance, however, the ride itself has no loops and is certainly not the scariest ride at the park. So, if the likes of The Smiler and Oblivion terrify you, the Wicker Man is an option for those wanting to conquer their fears of ride.