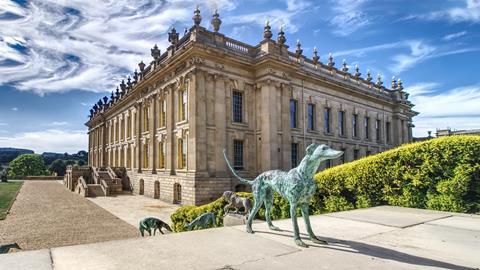 12 film and TV locations in the Peak District

Groups can step into the shoes of their favourite movie stars in some of the many Peak District screen locations, which form the backdrop for Hollywood blockbusters and memorable TV moments.

1. Chatsworth: Author Jane Austen used Chatsworth as the inspiration for brooding romantic hero Mr Darcy’s house, Pemberley, and it was subsequently used as the backcloth for the film version of Pride & Prejudice in 2005, and the BBC TV series in 1995. Home of the Dukes of Devonshire, it has also appeared in The Duchess (2008) and The Wolfman (2009).

2. Haddon Hall: The fairytale setting of Haddon Hall has played host to several film and TV versions of Jane Eyre, plus Cory Fukunaga’s acclaimed 2011 cult movie The Princess Bride (1987), Elizabeth (1998) and The Other Boleyn Girl (2008).

5. Hardwick Hall: The formidable Bess of Hardwick created the impressive Elizabethan masterpiece that is Hardwick Hall, described as ‘more glass than wall’, which provided the inspiration for Malfoy Manor in Harry Potter and The Deathly Hallows (2010)

6. Kedleston Hall: An 18th-century mansion with Adam interiors and parkland, which was once the home of the influential Curzon family, Kedleston Hall was also the setting for The Duchess (2008) and Jane Eyre (BBC TV series, 2006)

7. Lyme Park: Dating back from Tudor times, Lyme Park was later transformed into an Italianate palace, though some Elizabethan interiors survive. Visitors still flock to its lake to see where actor Colin Firth emerged, dripping wet in white shirt and breeches, as Mr Darcy in the BBC TV version of Pride & Prejudice (1995).

10. Matlock Bath: A village built along the river Derwent, Matlock Bath was the location for Derbyshire director Nick Whitfield’s award-winning debut film, Skeletons (2010), a quirky cult movie that was acclaimed as Best New British Film at the Edinburgh Film Festival.

12. Hadfield: The unassuming village of Hadfield near Glossop in the High Peak doubled as Royston Vasey in darkly satiric comedy The League of Gentlemen BBC TV series (1999 – 2002) and film (2005).