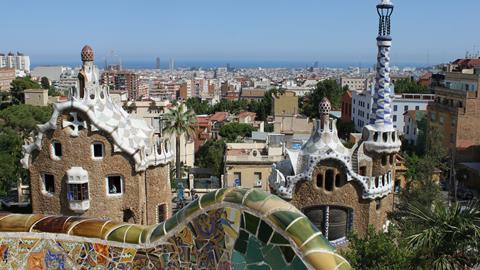 10 group travel ideas: get away with the girls

If you’re organising a short break or holiday for a ladies-only group, here’s ten group travel ideas to cater for all ages and interests. From spa and shopping breaks to outdoor and active adventures, there’s something to please everyone. It’s time to get away with the girls!

1. Beach and bars in Barcelona

Barcelona is a popular destination for a hen weekend abroad. Whether you’re celebrating a hen party or not, Barcelona is fantastic for a group city break with a safe nightlife, choice of spas and an enviable mix of beach and city.

Spend the mornings sight-seeing Gaudi architecture and shopping at El Corte Inglés before relaxing with a cocktail on the beach.

Ladies who love year round sunshine should escape to the Algarve. An hour’s drive from Faro airport, this part of Portugal is great for a girls holiday with bags of glorious sandy beaches, wine, restaurants, swimming pools and shopping all within easy reach.

3. Dine out in Yorkshire

Yorkshire boasts the largest concentration of Michelin starred restaurants than any other county in the UK and is home to The Burlington, a highly acclaimed restaurant boasting four AA rosettes, a Michelin Star and UK Wine List of the Year.

Other sophisticated attractions to enjoy in York include a boat trip on the lake at the 18th century Castle Howard and a visit to the Quilt Museum, home to some wonderful fabric and design inspiration, as well as its own Italian deli and restaurant.

Group travel organisers can arrange some woodland fun with a weekend in the protected forest sites around the UK. The Forestry Commission and Forest Holidays provide spacious cabins in locations around the UK, including Yorkshire, Cornwall and Scotland, which are ideal for large groups.

For outdoorsy ladies, explore the forest on foot or bike before soaking in the cabin’s private hot tub. There are even in-cabin spa treatments to indulge in too.

5. A cottage in the Cotswolds

Take a self-catered break in the village of Bourton-on-the-Water. This picturesque part of the Cotswolds has attracted visitors for over a century and its cottages are a brilliant place to soak up the traditional English countryside.

After a stroll around the river Windrush explore the villages’ tearooms and shops before relaxing in a traditional pub for the night. There’s plenty to explore in the surrounding area, with the spa towns of Cheltenham and Leamington a short drive away.

Dublin is a great place for a reenergising city break. The Dublin Marathon takes place around July each year with a route that takes in Phoenix Park, the National Concert Hall and the docklands - a great attraction for runners and supporters.

There are also Tough Mudder challenges in Dublin for ladies who can brave river crossings, crawl tunnels, mud pits and even paintball sniper attacks. Fly to Dublin in 90 minutes from London City Airport.

For skiing and celebrity-spotting, head to Courchevel 1850 in the French Alps. A popular haunt for the social elite, the Beckham’s frequently visit this swish ski resort. Posh and Becks visited in April 2004 with Victoria and the children returning in March 2006.

A year later, March 2007, Victoria came back, enjoying lunch at the Bouc Blan restaurant and cruising down the slopes on her own Chanel skis (of course). If you can’t afford to ski like a celeb, check out these ski holiday money saving tips.

If you’re a group that can’t bear to stay in the same place for long on holiday, try a Contiki tour of Europe. Pack the suntan lotion for a Greek island hopping holiday or, if you prefer to tick off the major sight-seeing hotspots, take a European Highlights tour which travels through France, Monaco, Italy, Germany and the Netherlands.

From grand shopping arcades like the Emanuele II to futuristic malls like Excelsior, Milan is famous for having one of the best shopping scenes in Europe.

Designer junkies will be in heaven with Chanel boutiques and Armani flagship stores but there are also great vintage finds to be found at the Navigli flea market.

Foodies are also spoilt for choice in Milan with Italian artisan delis like Peck and the L’Antica Arte del Dolce, a popular patisserie selling biscuits, cakes and tarts.

From traditional favourites like Champneys to sleek and contemporary establishments like Sk:n, Brighton is a haven of all things spa-related.

After an exfoliation body wrap and polish, enjoy champagne and oysters at the Riddle and Finns bar in the South Laines or relax with a posh coffee in the Small Batch flagship store which boasts its own syphon bar.