VisitScotland has created a Witch Trail Map to help groups discover spooky tales, dark history, magical places, and even ways to live like a modern-day witch. 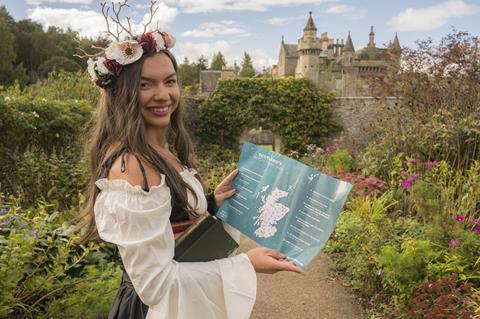 Scotland’s Witch Trail Map showcased at Abbotsford House in the Scottish Borders where a “Witch Corner” has been established in the library.

Forming part of the Year of Stories, the trail and map highlight a variety of locations and attractions with links to themes associated with witchcraft, including a love of nature and modern takes on the lore. They can be enjoyed year-round as part of a longer holiday or on a day trip.

The subjects of witches and witchcraft have actually had a profound influence on the story of Scotland covering history, women’s rights, superstition and the supernatural. There are numerous local tales spread across the country based in both fact and legend and a key focus for Scotland’s Year of Stories has been to highlight tales from communities that have been passed down through the generations.

The downloadable guide features 15 locations and will be hosted on VisitScotland.com alongside a blog taking a deeper dive into the subject and offering even more witchcraft-themed visitor experiences.

Experiences on the map include:

Calanais Standing Stones, Isle of Lewis
Standing for over 5,000 years, the Calanais Standing Stones have a rich culture of magical folklore. One legend tells how a fairy cow came to give milk to the starving people of Calanais. All was well until a rumoured witch seeking more than her share brought the giving to an end by milking the cow dry before vanishing. The stones are thought to have inspired Outlander’s magical Craigh na Dun.

The Witchery by the Castle, Edinburgh
Located in an impressive 16th century building at the gates of Edinburgh Castle, this atmospheric hotel and restaurant takes its name from the hundreds of women and men burned at the stake as witches on Castlehill. Today, visitors can dine in the luxurious surroundings of the original oak-panelled dining room and unwind in one of the lavishly decorated suites. Castlehill also features The Witches’ Well, a drinking fountain dedicated to those who lost their lives after being accused of witchcraft.

Kirkwall Witchy Walk, Orkney
This island was once a hotbed of allegations and accusations. Peer into Marwick’s Hole where those accused of witchcraft were imprisoned at St Magnus Cathedral and walk in the footsteps of the condemned to Gallow’Ha on a guided tour with Spiritual Orkney.

Blair Castle, Perthshire
This castle has a fascinating history of visitors, including Mary Queen of Scots, Bonnie Prince Charlie, and an alleged witch. Legend has it that the mountains overlooking the castle have acted as a hiding spot for a powerful witch who could shape shift into wildlife. Visitors should keep an eye out for creatures on a stroll around the grounds.

East Neuk Seaweed, Fife
Seaweed is believed to have been used by local wise women and healers of times gone by. East Neuk Seaweed offer various hands-on workshops in the coastal locations throughout Fife that highlight the healing properties and nutritional value of this sea vegetable. Dip your toes into the clear waters of Scotland and learn how to forage for and cook with wild seaweed.

Abbotsford House, Scottish Borders
The home of 19th-century novelist and poet, Sir Walter Scott boasts a world-famous collection of rare books on witchcraft, demonology, and popular superstitions. Visitors to Scott’s stunning library can see his treasured ‘Witch Corner’ overlooking the River Tweed. Find out how the facts inspired the fiction in some of the writer’s most iconic novels and explore how Scott used Abbotsford to help him bring the past to life. 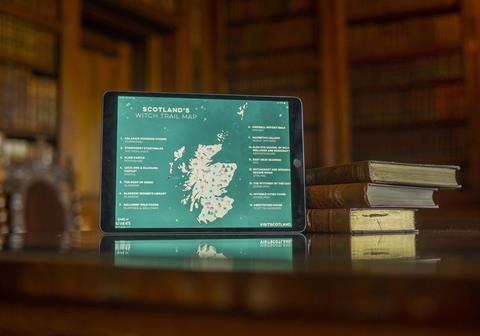 Scotland’s Witch Trail includes Abbotsford House, with its library containing one of the best and rarest collections of books on witchcraft, curated by Sir Walter Scott.

Cat Leaver, VisitScotland head of brand and content, said: “As we mark Scotland’s Year of Stories, it is important to showcase tales of all kinds and highlight some of the truly unique experiences on offer in Scotland.

“This new witch trail and map does exactly this and we know that pre-pandemic, the popularity of attractions thought to be associated with the supernatural and darker aspects of Scotland’s history were on the rise.

“Highlighting fun, educational, and engaging experiences like those featured in the map will help inspire people to discover Scotland’s rich and diverse stories for themselves.”

Giles Ingram, chief executive of Abbotsford, said: “Generations of visitors to Sir Walter Scott’s home have been fascinated by ‘Witch Corner’, a cabinet within his library containing around 250 prized volumes dating from 1477 to 1832.

“Due to the popularity of Witch Corner, Abbotsford are currently building a sculpture trail inspired by the stories found within these books; from tales of witchcraft, to ourisks, elves, fairies and other mystical beings.”

You can download the Witch Trail Map here and view the accompanying blog here.

You can get more information about Scotland’s Year of Stories at www.visitscotland.com/stories.