For the first time, highlights from the collection of Japanese works of art will be brought together by the Royal Collection in a major new exhibition opening at The Queen’s Gallery, Buckingham Palace in the spring. 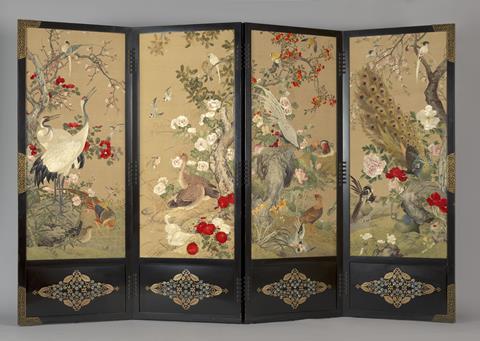 This rare collection of Japanese works will be on display at Buckingham Palace.

Japan: Courts and Culture will explore the diplomatic, artistic and cultural exchanges between Britain and Japan over 350 years, from first encounters and early trade under James I to the diplomatic engagement and modern partnership of Her Majesty The Queen’s reign.

On the occasion of Her Majesty’s coronation in 1953, the Emperor Shōwa sent The Queen the first post-war diplomatic gift between the two nations: a cosmetic box decorated with a heron by the great lacquer artist Shirayama Shōsai.

70 years later, as the nation celebrates Her Majesty’s Platinum Jubilee, visitors to The Queen’s Gallery will have the opportunity to see this exquisitely crafted coronation gift up close and to discover more about the unique and lasting relationship between Britain and Japan.

This royal story, never before told in a dedicated exhibition, will be explored through rare surviving examples of Japanese craftsmanship, including armour, weaponry, porcelain, lacquer, woodcut prints, delicate fans and embroidered screens.

Rachel Peat, curator of Japan: Courts and Culture, said she was delighted to give visitors “a rare chance to see these stunning works from Japan, which have been marvelled at, displayed and cherished by members of the British royal family for centuries”.

She added: “It’s a real opportunity to see first-hand the precious materials and intricate techniques which have so profoundly shaped British taste and which helped forge a lasting relationship between the two nations.

“We hope visitors will enjoy discovering the worlds of ritual, honour and artistry that link the courts and cultures of Britain and Japan to this day.”

The earliest direct contact between England and Japan was made when the first English ship reached Japanese shores in 1613. The captain brought letters and gifts from James I for Shōgun Tokugawa Ieyasu, the military leader who governed Japan on behalf of the imperial family. Saris returned with a letter granting the English permission to live and trade in Japan, and with gifts for the King.

The British royal family led the way in collecting highly-prized examples of Japanese lacquer, porcelain and textiles, much of which was produced specifically for the export market.

In the 17th century, Mary II displayed vast quantities of Japanese porcelain in her apartments at Kensington Palace and Hampton Court, and in the 18th century Queen Caroline, consort of George II, formed a significant collection of Japanese lacquer.

A century later, George IV incorporated Japanese porcelain into the opulent decorative schemes at Carlton House in London and the Royal Pavilion, Brighton. Many of the pieces acquired by the King were given new functions through the addition of elaborate European gilt-bronze mounts, turning a simple jar into a pot-pourri vase and animal figures into incense burners.

When Japan reopened to the West in the 1850s, diplomatic and political links were re-established. Queen Victoria’s son, Prince Alfred, Duke of Edinburgh, was the first member of a European royal family to visit Japan when he travelled there in 1869.

The relationship between the Japanese and British imperial and royal families continued to flourish through reciprocal royal visits and the exchange of gifts. In 1902, Prince Komatsu Akihito attended the coronation of King Edward VII and presented the King with an embroidered folding screen of the four seasons.

About the Royal Collection

The Royal Collection is among the largest and most important art collections in the world and one of the last great European royal collections to remain intact.

It contains one of the finest holdings of Japanese works of art in the western world, significant for both the unique provenance and exceptional quality of the objects.

Japan: Courts and Culture is showing at the Queen’s Gallery, Buckingham Palace from 8th April 2022 - 12th March 2023. For visitor information and group bookings, including discounts for 15 and more people, visit www.rct.uk.