Top 10 prehistoric sites in the UK for group visits

Stonehenge and other ancient stone circles have gripped the imagination of the public for centuries. 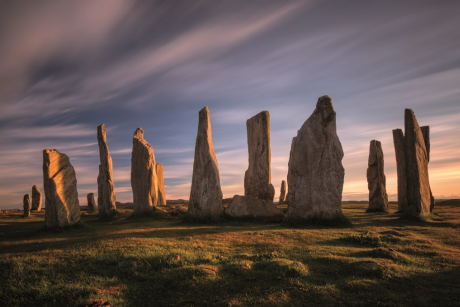 But few people probably realise just how many of them there are in the British Isles.

Now one enthusiast has catalogued more than 1,000 of Britain and Ireland’s most atmospheric prehistoric places, from recently discovered moorland circles to standing stones hidden in housing estates.

Andy Burnham’s The Old Stones: A Field Guide to the Megalithic Sites of Britain and Ireland reveals fascinating facts about the structures, such as which sites could align with celestial bodies or horizon landmarks.

Andy has selected his top 10 of interest to group travellers:

1. Stonehenge: It needs no introduction but I couldn’t leave this off as it’s one of the top ancient sites not only in Britain but the world. It is also well-served by many tour companies and is an amazing and fascinating day out.

2. Avebury Stone Circle: It can be combined as part of a day tour to Stonehenge. Other sites close by include Silbury Hill, West Kennett Avenue and Long Barrow. Why not call in at nearby Marden Henge, which is not often visited? It’s another mega henge spread over 35 acres and although there are no standing stones it gives fascinating background to the people who built these amazing monuments.

3. Callanish/Calanais Stone Circle: On the Isle of Lewis in the Outer Hebrides this is an outstanding destination to visit with many fascinating prehistoric sites in close proximity.

4. Castlerigg Stone Circle in Cumbria: The best-known ancient site in the Lake District. Others nearby include the giant Mayburgh Henge and the less well known Shap Avenue to the east.

5. Pentre Ifan Portal Dolmen: Not to be missed as part of a tour of Pembrokeshire, this imposing dolmen commands the local landscape.

6. Newgrange (Co Meath, Ireland): The passage tombs of Newgrange, Knowth and Dowth are very well known, but equally interesting and much less crowded are the passage grave complexes of Loughcrew, Carrowmoire and Carrowkeel further to the north west.

7. Ring of Brodgar Stone Circle: The island of Orkney is a megalithic wonderland. There are many other sites close by including the Stones of Stenness, Maeshowe and the Ness of Brodgar excavations, who are happy for tour parties to visit while they are running every August. From a base on mainland Orkney you can visit various smaller islands that are full of prehistoric sites to explore.

8. Lanyon Quoit: An imposing dolmen (or quoit in Cornwall) quite similar to Pentre Ifan. The far west of Cornwall is another classic area for megalithic sites, again with a whole host within a few miles of each other, including Trethevy Quoit, Men an Tol, and Chûn Quoit.

9. Bryn Celli Ddu Anglesey, the island at the north west tip of Wales, has plenty of sites to visit. This is the best known - a great mound with a tiny chamber inside that only a handful people can fit in at a time.

10. Arbor Low Henge: The best known megalithic site in Derbyshire and very impressive, even though all the stones are now lying down - as perhaps they always were. There are many other stone circles nearby that would make a good tour itinerary, such as The Nine Ladies, Stanton Moor and Nine Stones Close. Derbyshire is easily accessible from both Manchester and the Midlands, making a potentially good tour location.

The Old Stones: A Field Guide to the Megalithic Sites of Britain and Ireland is published on 20th September priced at £29.99.