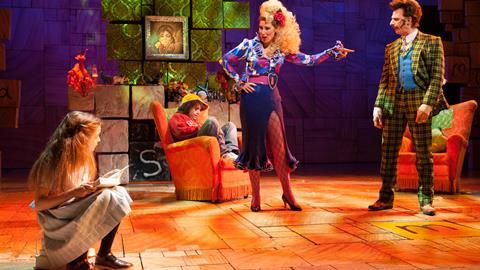 Catchy songs, colourful set designs, and a cast you can’t help but fall in love with. Laura Sexton reports back after reviewing the UK touring production of Matilda The Musical at Milton Keynes Theatre.

Being a huge Roald Dahl fan, I had no doubts that this show would be anything less than genius. From reading the book as a young child, to growing up with the much-loved film, I was intrigued and excited to complete the ‘trilogy’. I’m glad to say that the musical version of Matilda is as much fun as I imagine anyone can have going to the theatre.

The show opens to the most colourful set I’ve ever seen, with books and alphabet letters dotted from floor to ceiling. The opening song, Miracle, sang by an ensemble of adorable children already has you smiling and tapping your toes before you even met the star character.

We are introduced to Matilda visiting the library, where a cheerful Mrs Phelps has befriended her. Mrs Phelps played by Michelle Chantelle Hopewell is a wonderful addition to the show, who brightens up the stage in all of her scenes.

Also early on, we meet the Wormwoods, the horrible, yet strangely lovable family of Matilda, who refer to her as a boy and fail to understand her intelligence. Mr Wormwood played by Sebastian Torkia does an excellent job of portraying a sleazy overbearing car salesman, and makes the audience roar with laughter with every opportunity. And his wife Mrs Wormwood played by Rebecca Thornhill gives an equally epic performance.

Matilda (who was played by Poppy Jones but could be played by Annalise Bradbury, Lara Cohen or Nicola Turner at other performances) is endearingly charming throughout, and her rendition of Naughty both pulls on the heartstrings and makes you grin. Miss Honey, a favourite character of mine from the book and film, is portrayed by Carly Thoms, whose sweet vulnerability makes her a character I imagine many can relate to.

A personal highlight of the musical is the School Song where we see the young cast and the adult ensemble, who at times play the older students, join together for one of the most spectacular and intricately choreographed dance numbers I’ve seen. I won’t give too much away but let’s just say it involves the alphabet.

And I cannot write this review without giving copious amounts of praise to, Craige Els, who plays the infamous Miss Trunchbull. Gigantic and grotesque, Els’ character portrayal is as though Quentin Blake’s illustrations have come to life. And yet, Els’ performance is unique and as well as wanting to hate the character, you can’t help but feel excited whenever the scary headmistress enters the stage. And just you wait for the Phys Ed scene… picture this: Miss Trunchbull, played by a man, in a very short gym skirt, leaping around the stage.

The song When I Grow Up, in Act Two, remained in my head for some while after the show, and I trust everyone in the auditorium that night went home with the same delightful problem. The storyline is wonderfully bizarre, as it is in both book and film, but you’ll be thrilled to know the musical has plenty of differences, meaning even the most devoted Matilda fan will be in for some surprises.

Despite its fun plot, there are some realistic and rather dark themes, such as child abuse, neglect and bullying, but along with the characters, you’ll leave the theatre feeling as though you can stand up and conquer whatever you put your mind to, a message I feel everyone needs in trying times.

From its wonderful and talented cast, to its brilliant songs, which are all written and composed by the fantastic Tim Minchin, Matilda The Musical is a show that won’t be forgotten anytime soon. Watching it feels both nostalgic and brand new, and anyone going to see it will feel lucky to witness such a refreshingly sweet and humorous masterpiece.

Matilda The Musical is currently playing in the West End as well as touring the UK into 2019. Group organisers should contact their chosen theatres for more details on group tickets.