Tension, drama and mystery are the key components of the National Theatre’s landmark production of An Inspector Calls, offering audiences a glimpse into a much darker, pre-war Britain.

Written at the end of World War Two and set before the first in 1912, the performance is self-proclaimed as a compelling and haunting thriller and it’s hard to disagree. The story begins when an Inspector Goole calls unexpectedly on the Birling family home. Their celebratory dinner party is shattered by his investigations into the death of a young woman named Eva Smith.

Inspector Goole is a ghostly fellow (as the name suggests), mysterious and conniving. He is the puppet master of the story, wielding his strings to have the Birling family do and say whatever he pleases. He somehow knows too much about each of their roles into the girl’s death, and is not afraid to stand up to the hubristic Arthur Birling (Jeffrey Harmer) who tries to defend his family’s squeaky clean image. 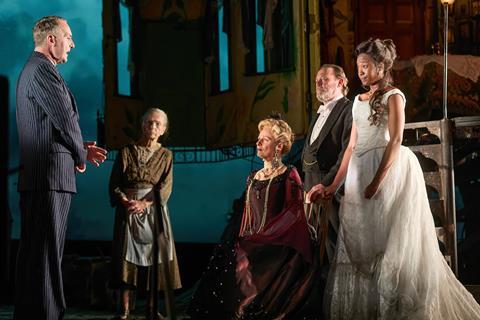 Inspector Goole (left) breaks the news to the Birling family and explains how they have each contributed to Eva Smith’s death.

Liam Brennan returns as the Inspector having played the part previously. The Scotsman has a tough job at getting the balance right when it comes to showing Goole’s emotions during his cameo, but he excels in the role. He shows calmness when first arriving, leadership when dictating the pace of the scenes and anger when the family turn on each other instead of showing remorse.

The Birlings are as upper class as they come, smug and quick to flaunt their privileges as soon as the Inspector arrives with Arthur happy to brag that he is chums with the top man at the local police station. Arthur’s wife Sybil (Christine Kavanagh) is utterly spiteful throughout, refusing to stand when interrogations are happening, clearly showing how inconvenient the visit is. 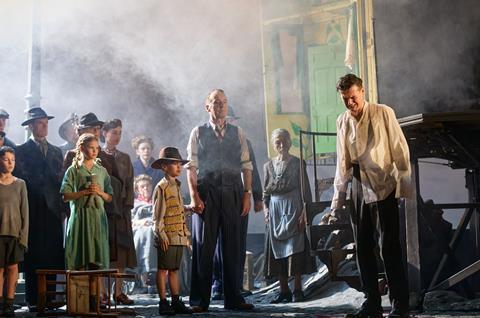 The thriller is full of mystery and drama.

Drama and tension grip the audience, with a terrific set designed to heighten the performance. The Birling’s house sits on a raised platform, sealed to the outside world at the start, before quite literally opening up for all to see. By the end, it lays in tatters as the family have the difficult task of taking responsibility or holding their position as ‘important’ people within the community. Stephen Daldry’s direction expertly helps build the suspense − no wonder this year marks the 30th anniversary of his take on the thriller. 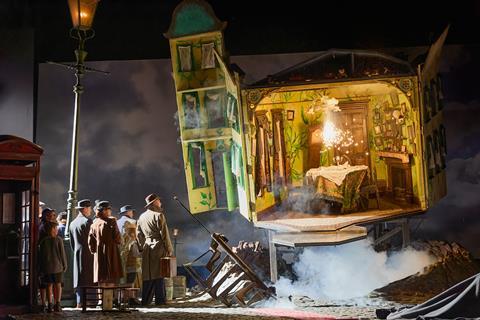 The family’s house is destroyed throughout the performance.

Although the haunting tale was written nearly 80 years ago, J. B. Priestley’s words are timeless. His themes are perennial and more importantly, the message you take away is something to be remembered, that kindness and humility go a long way. As the Inspector himself says: “We don’t live alone. We are members of one body. We are responsible for each other.”

It’s an extraordinary piece of theatre to watch unfold. Whether you’re like me and those seated within earshot who celebrated its triumph, or like one gentleman afterwards who commented about not fully understanding the plot, it’s bound to get you and your group talking.

We saw An Inspector Calls on Tuesday 27th September at Milton Keynes Theatre. The tour currently runs until 27th May 2023.