Castle Howard and York Minster: The lap of luxury 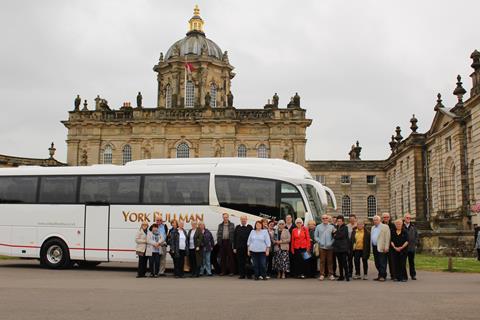 A group of GTOs visited Castle Howard on a 2017 Reader Club trip.

Yorkshire: it’s famous for its tea, its Wensleydale cheeses, and many walking trails. However, myself along with around 30 Group Leisure & Travel readers soon discovered that the county’s architectural history and heritage are just as captivating as its tasty treats and outdoor pleasures.

Castle on the hill

Set in the Howardian Hills, in amidst the greenery and rolling dales of Yorkshire, sits the luxurious Castle Howard, which was the meeting point for our group organiser fam trip. Warm homemade biscuits and hot beverages awaited us in The Grecian Hall, where we were welcomed with a presentation about the estate.

A buzz of amusement emanated throughout the room as we were told humorous stories of the many antics of the Howard family throughout generations, and how in 1699 Charles Howard, the 3rd Earl of Carlisle, turned to John Vanbrugh, a former politician, and asked him to design the palace, despite never designing anything before in his life. Lectures, very much like the presentation we were given, can be arranged for your group’s visit upon request.

Castle Howard has been in the Howard family for 11 generations, stretching across three centuries. The 8,800 acre estate boasts more than 200 listed buildings and monuments, as well as woodland, gardens, an arboretum, fountains and waterfalls – all of which have their own story.

“I’d like to come and spend a whole day doing either or, as I’d love to be able to see the gardens next time, having done the house tour this time. The guide at York Minster was fantastic and so knowledgeable. I’d definitely consider bringing my group to explore either Castle Howard or York Minster.”

Not just a facade

Visits to the estate with a group can include both house and gardens tours. On our Reader Club trip, we were given the option to experience one; I chose the house tour which was self-guided. There were staff on hand throughout who were particularly helpful in answering any questions anyone had about the different rooms.

A highlight was trying to spot the various paintings which had previously been mentioned in the presentation. This included works which depicted three Howard sisters, all of whom appear to have been painted with the same faces and can only be identified by their archived hand-written letters; or the painting which has been restored due to certain figures having been erased for mysterious, unknown reasons.

As we all walked into The Great Hall we stared at the dome ceiling in awe as we took in the breath-taking artwork above us, shining down like an entrance to heaven. We had been told during the morning’s presentation that the staff have a bet going that no one can enter that room without bending their necks to gaze at the ceiling. I did not see a single person in that room who didn’t.

Castle Howard is also the location where the 1981 series and 2008 film Brideshead Revisited was filmed and as you meander throughout the many rooms, which include a Museum Room, China Landing, Music Room, and Cabinet Room, you can learn more about the links to the screen sensation.

After, we headed back to The Grecian Hall for a light lunch. On the menu was leek and potato soup and a selection of bagels and rolls with smoked salmon, cream cheese and coronation chicken. 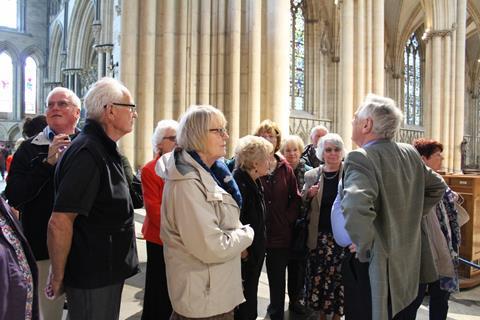 A group of GTOs visited York Minster on a 2017 Reader Club trip to York.

The first of equals

Our afternoon saw us head to York Minster. The journey from Castle Howard takes about 50 minutes, and the drive allows the opportunity to see sights such as the ruins of Sheriff Hutton Castle and the Nestlé headquarters.

York Minster, which is situated in the historic city of York, is a truly spectacular structure. Upon arrival we were introduced to our guide, who took us around on a short tour, taking us through a timeline of the building’s construction.

“The garden tour was so interesting and I loved finding out facts such as how they grew pineapples in the castle grounds, and learning about the outer buildings that you can see around the Castle Howard estate.”

The tour took us into the Chapter House which we discovered is where the clergy meet to make decisions. It was pointed out that there is no main seat; this is because it represents that idea of the head of the minster being ‘the first of equals’ rather than of higher importance. Altogether there are 44 seats, split up into six groups to ensure all voices are heard.

Full tours of York Minster will take groups through the 2000 years of history that surround the building and area of York. There is also the chance to go underneath the minster to the newest attraction, the underground chambers, which will help you uncover the historic truths all the way from Roman barracks to the foundations of the Norman Minster. You will also see relics and artefacts that have not previously been on display before.

“A trip like this has an awful lot of potential. We’d love to come back and see the gardens next time. The organisers have been so good and have been a lot of help and really bent over backwards in order to make sure everyone could do everything. York Minster was absolutely fascinating.”

The striking building also hosts Hidden Tours which allow those visiting to enter into parts of the minster that aren’t usually available to the public. Not forgetting of course that York Minister is first and foremost a place of religious worship, and visitors are welcome to attend daily services along with the many music events held throughout the year. During our tour we were encouraged to have a moment in silence and listen to a pray with echoed throughout and bounced off each wall creating a wave calm.

York Minster, like Castle Howard, has many stories to tell. Groups can find out about the fires that have taken place over the years, discover that the symbols on the ceiling designed by children through the TV show Blue Peter, and learn that construction is not always as precise as we may assume.

We ended the day on a high, in the form of scones with clotted cream and jam, back at Castle Howard, which groups can arrange when visiting on future trips. Yorkshire proved to be a successful location for groups to visit, with everyone taking something positive away from the trip. Whether your interests lie in architecture, artwork and construction or the history of dukes, duchesses and priests, a visit to Castle Howard and York Minster should be on every group organisers list.