Fans of the hit Netflix series will get a chance to unlock their powers and help Eleven save Hawkins as Stranger Things: The Experience arrives in London, including group packages. 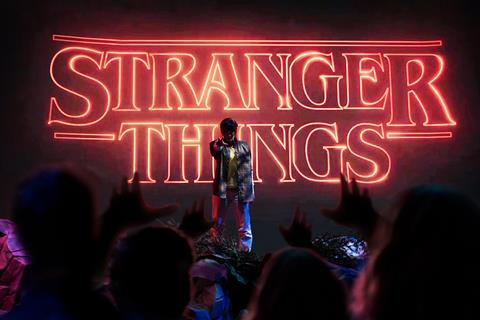 Groups can step into the ‘Upside Down’ at the new Stranger Things: The Experience.

Stranger Things: The Experience will be held at Troubadour Brent Cross Studios in north west London and organisers say it will throw fans into a world of supernatural mystery, enduring friendships and 80s nostalgia in a celebration of the Stranger Things universe.

Since the release of season four this summer, Stranger Things has become Netlix’s most watched English language series ever, edging ahead of period hit, Bridgerton.

The attraction based on the show opens on 18th August and uses audiovisual effects to create an immersive multimedia experience, launching guests on an adventure through the darker side of Hawkins, including the Hawkins Lab and the Upside Down, which are both featured in the series.

This new storyline, developed exclusively with the show’s creators, will reportedly propel guests into a parallel universe where they must run the gauntlet of terrors lurking in the dark and unlock their secret powers to help save the town.

After escaping from the Upside Down, groups are free to explore other attractions from the show at Mix-Tape (getting its name as a collection of Stranger Things greatest hits), such as grabbing a USS Butterscotch sundae at Scoops Ahoy or attempting to knock off MADMAX’s high score at the Palace Arcade.

Visitors will also be able to buy a cocktail at the first ever Stranger Things themed bar, plus exclusive merchandise.

Greg Lombardo, head of experiences at Netflix, said: “We know our Stranger Things fans will embrace the chance to be the heroes of the story, working alongside Eleven, Mike and the rest of the gang to fight the evil threatening to consume Hawkins.

“Fans love losing themselves in the world when they watch the show. Now, for the first time, they will be able to live out an episode from the series in real life.”

The experience lasts for 45 minutes plus unlimited time at Mix-Tape.

Tickets to Stranger Things: The Experience are now on sale, with group packages and exclusive sessions available.