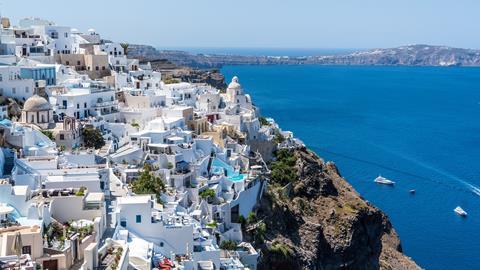 Christine Bennett, who runs Deaf Group Holidays, won the 2020 Group Travel Organiser of the Year Award® and was finally able to spend her £2,000 prize money this year on a Greek Island cruise. Here, Christine shares some of the highlights of the trip.

It was the best experience I’ve ever had. My partner Neil and I enjoyed it so much. We learnt a lot from all kinds of islands visiting Folegandros Island, Santorini, Aegina Island, Mykonos and Paros. 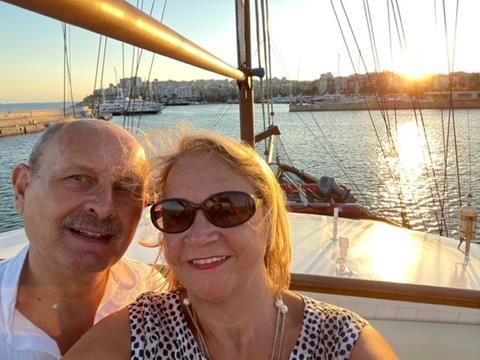 Christine and partner Neil on board Galileo.

The crew on the Galileo ship were friendly, warm and helpful.

They were patient, understanding and wrote notes if we didn’t understand them.

I would recommend this holiday for my deaf group holiday in the future. I fell in love with the boat.

Here’s a little taster of what we did:

Day one: our boat left Marina Zea, Piraeus Harbour, near Athens, in the late afternoon, heading for Poros island. We enjoyed an evening stroll after our dinner and the boat was looking beautiful.

Poros Town is small and picturesque, with paved alleys and a lovely waterfront. As a capital it is the commercial economical, cultural and residential centre of the island. It also played a great role in the Greek War of Independence when in 1828 the Greeks met in Poros to set the first Greek Constitutions.

Day two: our boat anchored near the Poliegos beach, where Neil went for a swim with other passengers. Then in the evening, we sailed to Folegandros Island. According to Greek mythology, the island was named after the son of King Minos, Folegandros. 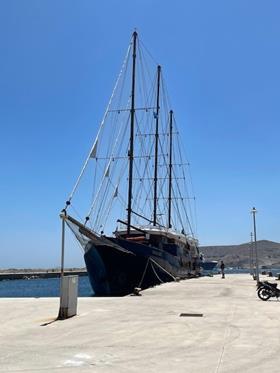 Christine fell in love with Galileo.

Day three: we had an early morning sailing to Santorini Island, it took our breath away to see this beautiful island. The boat docked all day while everyone went on an excursion trip. Neil and I went up on a cable car to the top of the cliff.

The panoramic view from the top of the cliff was amazing. It was great to explore the various shops and restaurants and also see people riding on the donkeys up the mountain.

We felt privileged to be back on the island, I took my group there in July for a week so it was great to return. In the evening, while on the boat, we saw a beautiful sunset which topped off the day.

Day four: we arrived at the small island of Paros in the early afternoon, and had a lovely walk around. Before dinner there was time for a cocktail and nibbles with everyone in the lounge and then later on we were treated to a fantastic Greek dancing display.

Day five: our boat arrived at Mykonos, one of the most famous islands. We saw the five windmills which are the iconic symbol of the city to harness the seasonal winds. 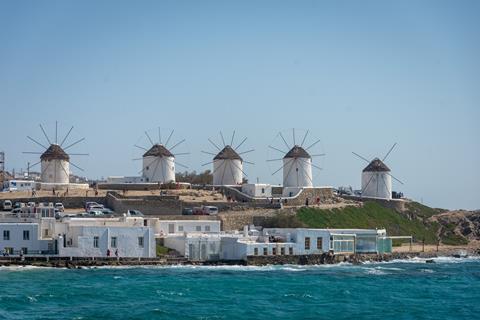 The Mykonos windmills are an iconic feature of the Greek island.

Day six: we headed to Syros, one of the smallest islands in Cyclades and the capital of the Cycladic group of Islands. We found out about the island’s interesting history. Attractions include the Town Hall which is one of the 19th century masterpieces of Ernst Ziller, the famous Saxon architect who became a Greek naitonal. We returned to the boat for a drink in the evening, watching all the other lovely boats on the harbour before the Captain’s Dinner Gala.

Day seven: our boat docked at Aegina Island in the early morning. We walked up the steep hill to have a look at the ruin temple at the top. The ancient ruins to the north of Aegina town, at Kolonna, are a testament to the long history of the island and the excavations present a complex layer of ruins crowned by the foundations and a lone standing column from the Temple of Apollo.

I’d like to say thank you to Group Leisure & Travel for giving me this opportunity, I feel honoured to have received the award in 2020 and this holiday made me feel it was worth all the hard work I have put in over the years. The beautiful Galileo boat was an extra bonus - I absolutely fell in love with it.

Christine’s Greek Island cruise was taken with Variety Cruises, which was booked with Arena Voyages (part of the Arena Travel group).