Regional Theatre Review: Around the World in 80 Days

They were inspired by the impossibility. Eight actors, 125 characters and just 25 days. Writer Laura Eason’s adaptation brings Jules Verne's classic to life on one stage, with heaps of energy and plenty of laughter, says Keeley Rodgers.

Each of the 120 minutes is perfectly timed, well thought-out, just like Phileas Fogg’s seemingly unrealistic challenge to circumvent the globe in just 80 days. And true to form, on schedule, the cast of Around the World in 80 Days takes us on a journey of the globe, armed with just a few old luggage cases, a bit of wooden fencing and bags of illusions.

Portraying the stiff-upper lip English gentleman perfectly, Andrew Pollard as Fogg, contrasts beautifully with our slapstick, loveable Michael Hugo as hapless French valet Passepartout (or at least we think that’s what he said his name was) who gets himself in and out of scrapes throughout.

While the stage at the Oxford Playhouse opens with Fogg’s mundane routine, complete with the same umbrellas, bowler hats and cups of tea (at the optimum temperature of course), the rest of the show is far from predictable.

If you’re wondering how just eight actors take on more than 100 different characters, or how the audience is suitably transported around the globe, it is a sight to behold. Think minimal design. Maximum imagination. With lots of tongue-in-cheek humour thrown in.

Not familiar with the story? You’ll be taken on a true adventure, full of surprises. It all starts when the very wealthy, and ever so slightly stuffy, Phileas Fogg agrees to an outrageous wager in the Reform Club that puts his life and fortune at risk as he embarks on a journey from Victorian London through Asia and across the Pacific in exactly 80 days, a race against the clock.

True to Verne’s original 1873 tale, there is no hot air balloon (well, not exactly anyway), even if one was introduced in the 1956 film version. But there are boats, trains, an elephant and even a sailing sledge, with some token snow thrown in for good measure. And just as the gentleman and suspected bank robber Fogg is warmed and loosened up on his journey, the production doesn’t take itself seriously at all. In fact the director, and truly energetic cast, seem to poke fun at the deliberate lack of special effects and elaborate set – let’s just say there’s a bit of audience participation to help them with the challenge.

Indeed many would say Hugo steals the show, and he is fabulous, but there are so many other charming characters, not least the ‘pantomime’ Scotland Yard detective Inspector Fix, played by Dennis Herdman, who has a touch of John Cleese about him. And no matter how many times they do it, the money flinging across the stage trick is captivating, as are the slow motion and fight scenes – you can tell they watched a few spaghetti western and Bruce Lee films. 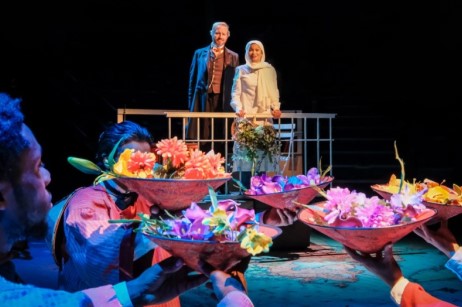 The performance is full of colour and energy, with the simplest of props. Kirsten Foster as Mrs Auoda.

A simple set is the backdrop for a bold and talented set of performances, making the audience feel part of the many escapades in a timeless story. They have succeeded in making the impossible look so easy, and yet so intriguing. But did they make it? You better not wait any longer and go and find out for yourselves! Game of Whist anyone?

Around the World in 80 Days embarked on a six-month tour in June, which is visiting 17 UK venues nationwide, including a five-week summer season in London at Cadogan Hall, culminating with a six-week Christmas season at The Lowry, Salford Quays.

Group travel organisers should contact their chosen venue for information about group rates, and can do so by visiting the website: www.80dayslive.com