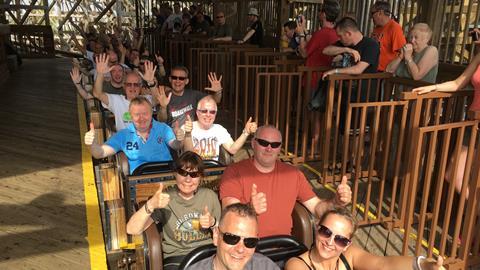 Andy Hine, founder and organiser for the Roller Coaster Club of Great Britain, on staying connected during lockdown and the logistics behind organising trips to ride some of the word’s best roller coasters.

Firstly, what a unique club, how did you come up with the idea?

When I was about six or seven my parents took me to Blackpool Pleasure Beach which is where I went on my first roller coaster. I had my eyes closed for the whole ride, but when we got to the end, I wanted to get back on because I had missed everything. I went on for a second time and the passion was born. When I was a bit older, I began travelling around the world trying to find where the best ones were as there was no internet back then. 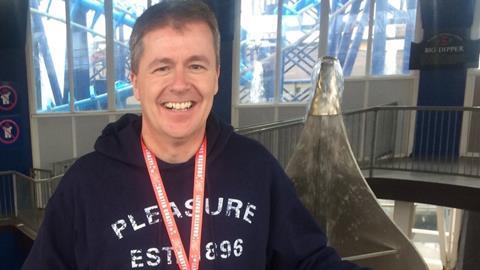 Andy has been on more than 2,000 different types of roller coasters around the world, an estimated 35,000 times which is to the moon and back twice!

On my travels, I started to see the same people that I had seen at other amusement parks, so I put up some signs for anyone interested to contact me with the idea that maybe we could all meet up at an amusement park on the same day. My first event was at Dreamland Margate in August 1988 and 11 people turned up. From there, it has grown massively. I even got an MBE in 2004 for uniting people and promoting tourism and now on average, I have three to four hundred people at an event.

“In a world where it can be hard to smile, especially at the moment, it’s nice to know that you are responsible for a lot people having some happiness in their lives.”

What was it like meeting the Queen to receive your MBE?

When I arrived at the palace, she explained that she didn’t ride roller coasters, but she knew that William and Harry did, they were a lot younger back then. I did say to her that if she was looking for a good Christmas present, I would do her a discounted membership for the club! She smiled, and I left with my head so that’s a bonus.

How have you found this year, with so many guidelines affecting travel?

This year has been horrendous for us. We do a ski holiday in the winter for those that still need their up and down, out of control fix while the amusement parks are closed. We managed to get that holiday in this year, and then I had already sold 400 tickets for our Blackpool event, which is our best event in April, but of course it didn’t happen. In May I was due to take 70 people to America to 16 different amusement parks, so that one has been deferred for a year, I hate the cancelled word because it sounds so permanent. Our other regular trips we do all got cancelled too, as well as our Ski holiday for next year. 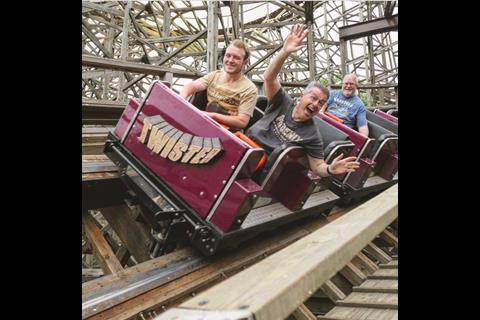 Andy on the Twister at Knoebels in Pennsylvania. 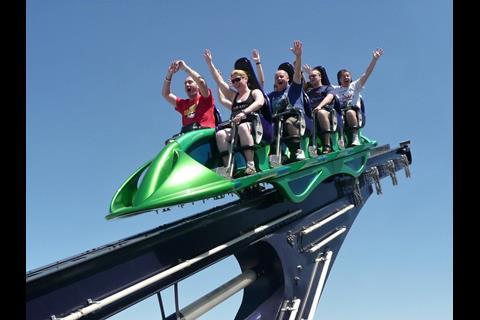 Members riding X-Scream which is on top of the 1000ft high Stratosphere Hotel in Las Vegas - Andy can be seen at the back. 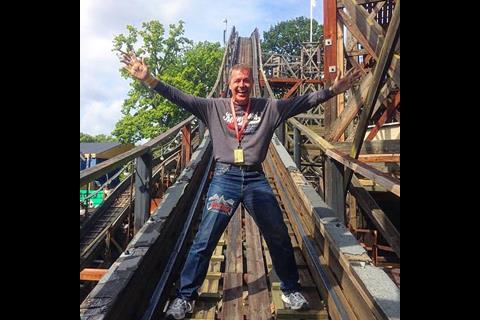 Andy posing on the tracks of a wooden roller coaster. 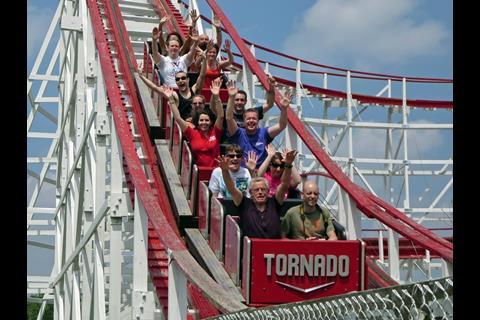 Members on the Tornado (Andy in row 3) at Stricker’s Grove in Ohio. 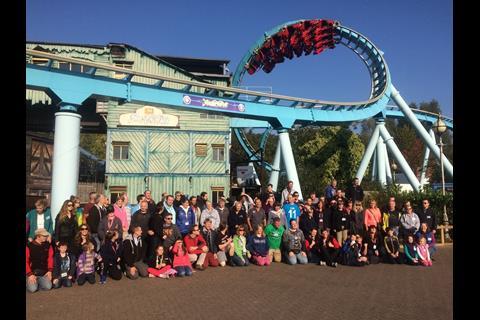 That’s such a shame, how have you been keeping your members connected since March?

I send around a magazine called AIRtime every month to keep members updated as to what is going on. That gives them all the latest news about the club and theme parks. The craziest thing I have done is recreate the Paradise Room that we use in Blackpool when we go. Of course this was virtually, so now, whenever it would have been an event that has now been cancelled, I invite everybody to join us in the virtual Paradise Room live online. We have a special login and then we’ll do quizzes, roller coaster videos and there is also a chat area so people can still talk to each other. 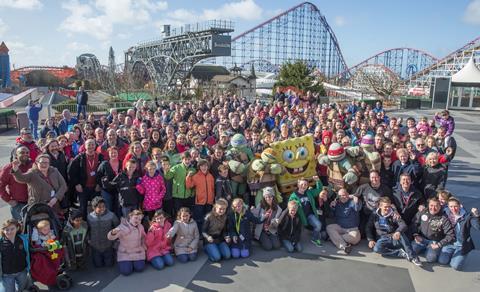 Members at one of Andy’s previous events in Blackpool.

When you can get back out there, how do you organise these big events across the world?

If it’s a UK trip, I’ve been doing it so long that I have a good relationship with lots of different theme parks, so it’s a fairly easy process to arrange. If it’s in Europe, I will call different companies and explain what I need, including coach travel and hotels and they sort all of that out, while I sort out the park bit. It gets a little bit more complicated when we go to America, as we do tours of different amusement parks across the country, so I deal with an agent who helps me sort this out, and fortunately he’s a coaster enthusiast too so he comes along with us, so if there are any issues, he is there to sort them. It’s the little things that make those trips special too. I always contact the airline in advance and tell them when we’re flying so the pilots welcome us on board. Some of them are great, and tell us they’ll be doing some loops over the Atlantic!

Why do you continue to do it more than 30 years on?

I get to stand on a roller coaster platform and watch people smiling. When you have responsibilities and routines throughout the week, you can leave all your troubles behind you the moment you enter those amusement park gates at the weekend. For those few hours you can just enjoy the rides.

We had to ask it, what’s the best ride you have ever been on?

I’m a traditionalist so I really like wooden roller coasters. We actually ran a campaign called ‘Real Coasters are Made of Wood’ for 20 years because we hadn’t had one in the UK since 1996. I got invited to Merlin’s head offices to explain to the chairman why they should invest in wood and after that, they built Wicker Man at Alton Towers. They opened the ride during the club’s 30th anniversary so that was really big for us as we spent 20 years trying to get it. So for me, it’s all about wooden coasters. But if I had to pick my favourite, I would go for Phoenix, which is in a tiny family-run park in America called Knoebels.

Andy’s group at a glance…